Abarth 2000 model made by Dinky-toys with Reg.: 202G3; but with new wheels added, close fit of the opening parts, deburred of casting imperfections and repainted.

1970, Designed by Mario Buonocunto for Pininfarina. Unlike other stylists, Pininfarina didn’t chose the name, however the car could have been called "Testudo" in honour of the tortoise like form of it’s rear end and roof line, with air intakes to the mid-mounted 2000cc engine.
Simca 4cyl DOHC 1946cc 192hp.
Posted by Antonio at 2:06 PM 1 comment:

Alfa Romeo TZ Canguro model made by Mercury with Ref.: 29; but with new spare wheel added, close fit of the opening parts, deburred of casting imperfections and repainted.

Designed by Giorgietto Giugiaro for Bertone. Debuted at 1964 Paris Car Show. Alfa Romeo Canguro, stood out as the more ambitious and innovative project as a racing interpretation of the Giulia TZ, with a tubular chassis, it resulted in the production of the Giulia TZ2.
Giulia TZ chassis 101 with a 4cyl dohc 1570cc 112hp at 6500rpm 2 Weber carburetors 5speed gearbox 650kg Auminium body 1 built.
Posted by Antonio at 8:11 AM 2 comments:

Alfa Romeo OSI Scarabeo model made by Dinky-toys with Ref.: 217; but with new headlights and rear window added, close fit of the opening parts, deburred of casting imperfections and repainted.

Designed by Peter Coltrin debuted in 1966 Paris Car Show. Possibly conceived for a small series production, which never happen.
Alfa Giulia GTA engine installed transversal: 4cyl dohc 1570cc 115hp at 6000rpm 106ft.lb at 3000rpm 2 Weber carburetors 5speed gearbx 200km/h 3 built, a spider and two coupes with totally different bodies. The body was in material plastic on a tubular chassis for a total weight of around 700 Kgs.
Posted by Antonio at 8:03 AM No comments:

Designed by Franco Scaglione, and built by Carrozzeria Marazzi, was first presented at the 1967 Turin Motorshow.
The Stradale, first built in 1967, was based on the Autodelta Alfa Romeo T33 racing car.V8cyl dohc 1995cc 230hp at 8800r 138ft.lb at 7000r Spika FI 6sp 260kph 0to100=5.5s 572kg 18 build
The Stradale is believed to be the first production vehicle to feature dihedral doors, also known as butterfly doors. Other vehicles which feature doors of this nature include the Toyota Sera, McLaren F1, Ferrari Enzo and the Saleen S7. The Stradale also features windows which seamlessly curve upward into the "roof" of the vehicle. 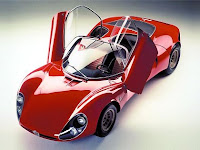 The car was an attempt by Alfa to make some of its racing technology available to the public, it was the most expensive automobile for sale to the public in 1968 at US$17,000.
Posted by Antonio at 7:49 AM 2 comments:

Alfa Romeo Carabo model made by Solido with Ref.: 1816

The concept car was shown in October 1968, at Porte de Versailles in Paris, to a stunned crowd. The Alfa Romeo Carabo was a milestone in Supercar design, "Carabo," meaning beetle.
Designed by Marcello Gandinni for Bertone. The Lamborghini Miura, also previously designed by Gandini, had suffered from front-end lift at high speeds, so the Carabo was an exercise in focusing on an aerodynamic solution. The car also featured upward hinging doors, which later inspired the Lamborghini Countach.
It was built on the Chassis of the mid-engined V8 Alfa Romeo Tipo 33 with a V8cyl DOHC 1995cc 230hp at 8800rpm 148ft.lb at 7000rpm Spika Fuel Injection 250km/h 0 to 100=6.4sec 6speed gearbox 990kg.
Posted by Antonio at 7:31 AM No comments:

Alfa Romeo P33 Pininfarina made by Corgi-toys with Ref.: 380-A1; but deburred of casting imperfections and repainted.

The second 33 Stradale-based concept car displayed at the November 1968 Turin Salon was executed by Pinninfarina. Known as the P33 Roadster, it mixed subtle curves with plane-like surfaces but was most memorably equipped with large overhead spoiler and "beetle-wing" doors. Painted white with the interior and aerofoil in brown, it seems probable this body was later removed by Pininfarina and replaced with the "Cuneo" design that debuted in January 1971 at the Brussels Motor Show. This speedster was built on an Alfa Romeo Type 33 sport cars chassis with a V8 mid-mounted engine - V8cyl dohc 1995cc 230hp at 8800rpm 148ft.lb at 7000rpm Spika Fuel Injection
Posted by Antonio at 7:19 AM No comments:

Alfa Romeo Nuvola made by Solido with Ref.: 1556

Bertone Shake model made by Solido with Ref.: 189

Presented at the 1970 Paris Motor Show. A Bertone styling exercise done in collaboration with Chrysler France which was what Simca was called by then.
The Bertone Shake was built on a SIMCA 1200 S chassis, the same one used for the coupé created by the Turin designer for the French manufacturer. Simca 1200 S chassis was therefore adapted to include some stylistic elements used in a previous design (the 1969 Runabout). Mechanics also based on Simca 1200S - 4cyl 1204cc 84hp Twin-Choke carburetor.
Posted by Antonio at 6:41 AM 4 comments:

Email ThisBlogThis!Share to TwitterShare to FacebookShare to Pinterest
Labels: -Bertone

Chevrolet Corvette Mako Shark I model made by Autoart with Ref.: 51061

1962 ‘Mako Shark I,’ was the brainchild of William (Bill) Mitchell. Legend surrounds the origin of the car, including Mitchell’s flash of inspiration after catching a shark while deep-sea fishing. The Shark looked like a real shark, with a mouth, gills and a shark-like paint scheme that gradated from blue/gray on the top to silver/white on the bottom (along the rocker panels). The Shark, along with the Stingray Racer, heavily influenced the body design of the second generation of Corvette models.
1961 XP-755 Shark: Larry Shinoda restyled the XP-700, retaining its bubble roof and reshaping the nose to resemble the Sting Ray’s. 1962 Mako Shark: Yet another redo on the XP-700/755 removed the bubble roof, updated the interior, and freshened up the nose to include a bumper bar.
Chevy-V8cyl 6999cc 425hp at 5800rpm (Glass-fiber panels)
Posted by Antonio at 6:05 AM No comments:

Chevrolet Corvette Astro I model made by Auto-Pilen with Ref.: 315

1967, Model XP880 designed by Larry Shinoda.
Flat6cyl air cooled sohc 2884cc 240hp 2 Weber carbs 2Asp 1500kg (apx.)
The interior had the gauges, warning lights and twin-grip aircraft-style steering control device. The car's height was under three feet, and access to the cockpit was provided by a hinged rear body/door section, a periscope rearview mirror on the roof provided a wide-angle view. The unibody construction had large boxed side sill members that added stiffness as well as housing a fuel cell on the passenger side. The bulkhead behind the driver and the forged aluminum windshield header provided rollover protection. Trick stuff in 1967.
Posted by Antonio at 5:48 AM No comments:

Chevrolet Corvette Astro II model made by Mebetoys with Ref.: SB102-1; but with new wheels added, close fit of the opening parts, deburred of casting imperfections and repainted.

Presented at the 1968 New York Auto Show it was a less extreme styling than Astro I.
Model XP882 designed by Larry Shinoda. Astro II was designed primarily to showcase its rear-mounted powertrain application. Unlike the Astro I, Astro II had doors to access the passenger compartment. The rear compartment hatch still lifted up - this time, to provide access to the engine compartment. The front compartment was designed as a storage area. Lead engineer Zora Arkus-Duntov and GM styling chief Bill Mitchell were hoping Astro II would be the concept for the next generation Corvette, but the GM management figured the public was not ready for a mid-engine car.
V8cyl 6998cc 390hp 1497kg.
Posted by Antonio at 5:31 AM No comments:

Ferrari 206 S model made by dinky-toys with Ref.: 216; but with new wheels added, close fit of the opening parts, deburred of casting imperfections and repainted. 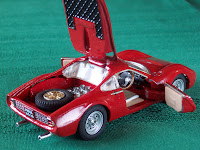 Presented at the 1965 Paris Salon. This car has unique bodeywork by Pinnifarina used chassis s/n 0840 and was the design study for the 206/246 GT Coupe.
The engine is the celebrated dual ignition V6 conceived by Alfredino (Dino) Ferrari V6cyl 1987cc 205hp at 8000rpm 3 Twin Choke Weber 40DCN.
Today the car is part of the Le Mans Museum.
Posted by Antonio at 3:58 PM No comments:

Ferrari Dino 206 C Competizione model made by Politoys with Ref.: 589-2; but with new front and rear thinner ailerons added, close fit of the opening parts, deburr casting of imperfections and then repaint.

Presented at the 1967 Frankfurt Auto Show.
Designed by Paolo Martin for Pinninfarina. Over the years, this car became known as the "The Yellow Dino".
Dino engine - V6cyl 1987cc 205hp at 8000rpm 3 Twin Choke Weber 40DCN.
Posted by Antonio at 3:48 PM No comments:

Ferrari P5 model made by Auto-pilen with Ref.: 309; but with new spare wheels added.

Presented at the 1968 Geneva Auto Show.Designed by Leonardo Fioravanti for Pinninfarina.
This Ferrari 250 P5 Berlinetta Speciale showcar was built using a P4 s/n 0846
and a 3L engine. The radical design of the car carried a few design elements that would make their way into later day production vehicles. Most notably, this car has clear rear glass over the engine, much like many modern Ferraris do today.
Engine - V12cyl dohc 2989cc 400hp at 9500r 3vpc 2sp/c 320kph 2built
To note that Pinifarina produced another very similar prototype badged as an Alfa Romeo, This car, the 33 Coupe Prototipo Speciale, was painted bright yellow and was introduced at the Paris Motor Show of 1969.
Posted by Antonio at 3:34 PM No comments:

Ferrari 512 S Berlinetta model made by Joal with Ref.: 119; but with new wheels added, close fit of the opening parts, deburred of casting imperfections and repainted.

Ferrari Sigma GP model made by Mercury with Ref.:301; but deburred of casting imperfections and repainted. For more information see: Ferrari Sigma GP

Ferrari 512 S Modulo model made by Politoys with Ref.: M 17; but with 2 windshield wipers added, close fit of the opening parts, deburred of casting imperfections and repainted. For more information see: 1970 Ferrari 512S Modulo by Pininfarina

Originally presented at the Geneva Motor Show in 1970 in black and subsequantly repainted white and displayed at the 1970 Turin Motor Show and the 1970 Osaka World Fair.
Designed by Paolo Martin for Pininfarina. Won 22 International Design Awards its geometry. The Modulo was not intended to be a racing prototype but as a futuristic styling exercise and a research vehicle, which abandoned traditional styling and construction techniques in favor of futuristic ideas. The Ferrari Modulo was based on a 512S s/n: 1046 chassis and running gear. Engine - V12cyl dohc 4valves/cyl 4993cc 550hp at 8500rpm 371ft.lb at 5500rpm Lucas Fuel Injection. The Modulo had a length of 4,480mm, a width of 2,048mm, and a height of 935mm.
Posted by Antonio at 2:32 PM No comments:

Quick links to my other 1/43 blogs and Photos

Click on any picture to see it in full size

Antonio
I am a retired mechanical engineer with a passion for 1/43 car models, as well as real ones.